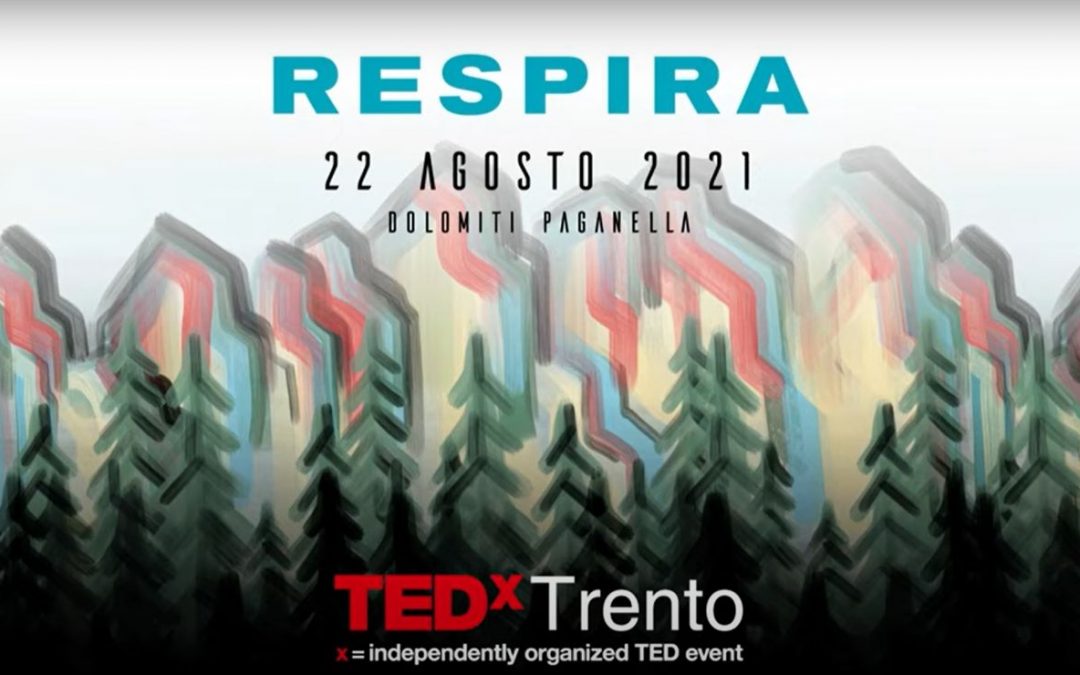 A modern reinterpretation of Trentino’s anthem with an a cappella choir enriched with Chiara Chistè voice, harmonized by the sound of kalimba and the rhythmic accompaniment of Simone Brilli gave birth to TEDxTrento 2021.

The event took place on Sunday, the 22nd August 2021 and PerVoice confirmed its presence as partner of the event.
With the theme “Breathe”, this edition wanted first of all to invite people to take advantage of the fresh air at a height of 1827m on Malga Terlaga’s meadows, near Andalo. Even though the weather did not allow us to admire the Brenta Dolomites peaks which were beautifully arranged as a backdrop to the stage, it did not stop the exceptional paragliders who descended from the Paganella top to inaugurate the event. Nico Calliari, young acrobatic paraglider and winner of the Italian Acrobatics Cup, and Alfio Ghezzi, partner of the event and exceptional Trentino chef who amazed the guests of TEDxTrento, even in the absence of brigade and kitchens.

There was great professionalism about safety, green-passes and tickets control at the entrance of the fenced area, guaranteed physical distance between people and great attention from the volunteers to ensure that everyone respected the simple rules.
This year’s event was more informal within an intimate space linked to sensations rediscovering the outdoors in touch with nature.
Gathered around the stage, sitting on the floor on picnic blankets, we saw many participants we met all over the years who accompanied us from edition to edition.
A special thanks goes to Mirta Alberti, the TEDxTrento curator, always very smart with her string of beads under the technical sweatshirt and to the volunteers, the silent engine of the event.

The interventions of the speakers were as always multidisciplinary, resulting a mix of technology, personal stories, call-to-action, awareness, and empathy. We also had the opportunity to listen to tales of man against nature, against the wind and how important it is to follow our dreams with the helmsman Francesco Bruni; we also heard a story about a friend’s last breath, the importance of conscious breathing and how this can guide us through difficult moments of our lives with the writer Daniel Lumera. The event was introduced by Professor Elisa Ricci of DISI and head of the Deep Visual Learning laboratory at the Bruno Kessler Foundatio. After the first revolution of deep-learning application which created software able to “see” (we could say “recognise”). Today we are in the middle of the second revolution with the development of software able to “imagine”. Professor Ricci’s speech was in fact focused on generative neural networks (GAN), tools capable of generating original elaborations such as video starting from an image in the case of computer vision. GANs are developed through the training of two DNNs, one generative and one discriminative that are put in competition with each other. In a modern Turing test, the first network generates the data, while the second must decide whether the data received are real or generated by the first network. This gradually leads to the creation of highly sophisticated systems capable of deceiving even the human eye. A much-debated example is the one of Deepfake, i.e. videos generated of real people making gestures or saying things they have never done or said in real life. Moreover, we found generative networks that write chapters of books or poems, that paint pictures or compose music. The constant theme of ethics in the creation of artificial intelligences is back. Do these tools empower us as creative beings or are they going to replace humans?
Man has always used technology to overcome his limits (e.g. the telescope was invented to see further, wasn’t it?) and soon this will become a consolidated chapter in our history. We will learn to use these technologies in an ethical way, as tools to support our work, even creatively, without feelings of competition.

Surprisingly, after the greetings this year’s edition closed with the guided breathing exercise of Giusi Valentini accompanied by Riccardo Rea’s handspan.
A last long and deep breath of this edition before going back to the valley.